Have you heard of Fyrn? Even if you’ve never uttered the name (said “fē, yərn/”), there’s a chance that you’ve been intimate with their work… Thousands have spent an evening in Fyrn chairs. From Piccino’s private dining room to the Bellota bar, the work of this San Francisco born-and-based furniture brand can be found in some of the most sought-after spaces in California.

This San Francisco born-and-based furniture brand was started by third generation furniture designer and woodworker Ros Broughton. Drawing inspiration from his grandfather’s revival of the early American Hitchcock chair and entire family’s love of heirloom craftsmanship, Ros sought to counter the trend of disposable home-decor by creating a chair made to last. His handiwork soon became known as Fyrn, meaning “ancient” or “formerly of old,” and the brand took off thanks to a series of lucky, small-city connections.

Today, anyone can recognize an original Fyrn chair from signatures like lean lines, lightweight wood, and exposed brackets. And, while each chair is beautifully designed and thoughtfully crafted, it’s the patented brackets that give the Stemn line its edge. Visually, the metallic corners have modern appeal and structurally it’s unvaryingly resilient. Fyrn chairs have actually been put to the test in public spaces and continue to survive the rigors of restaurant life. 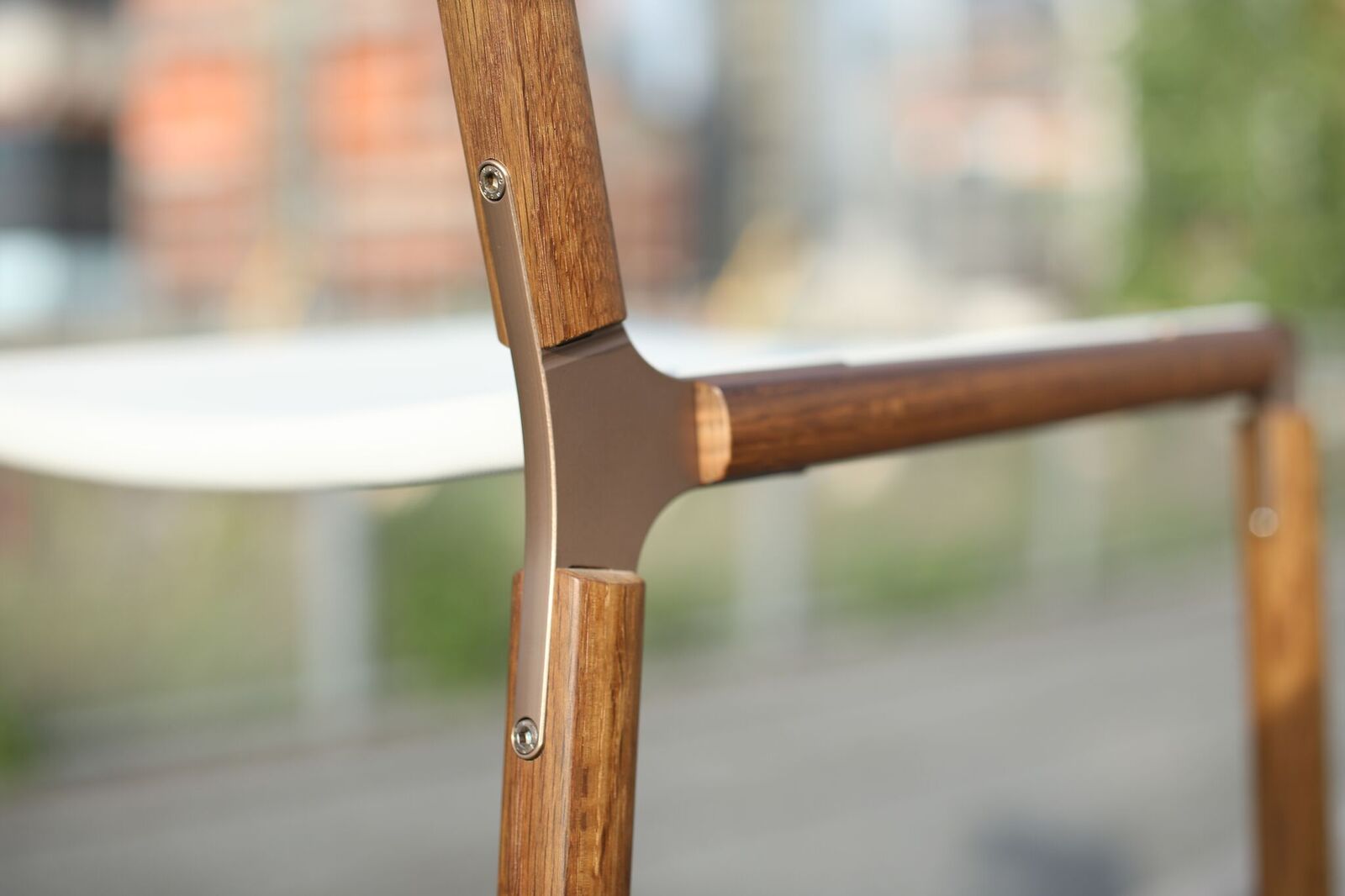 After seeing each piece hold up, Fyrn’s team is prepared for their next phase: becoming an attainable designer brand with lines that anyone can get their hands on, and rears into. But how can small Creators scale up and stay true to their origins?

Let Your Work Tell its’ Story

If we hear a piece was made to last 100 years or you see the word “Heritage” on a label, how do we know it isn’t just a marketing gimmick?

At the helm, founders Ros and David stay true to the techniques and philosophies that earned Fyrn its’ sterling reputation to begin with: durable craftsmanship, thoughtfully sourced materials, and beautifully useful designs. Restaurant customers prove that Fyrn’s work is solid.

“Wood is wood. That being said, some of these have been in restaurants for over 3 years now and restaurants are incredibly abusive… so the first few years were really prototypes out into those public spaces to make sure that these were going to hold up…” explains David. 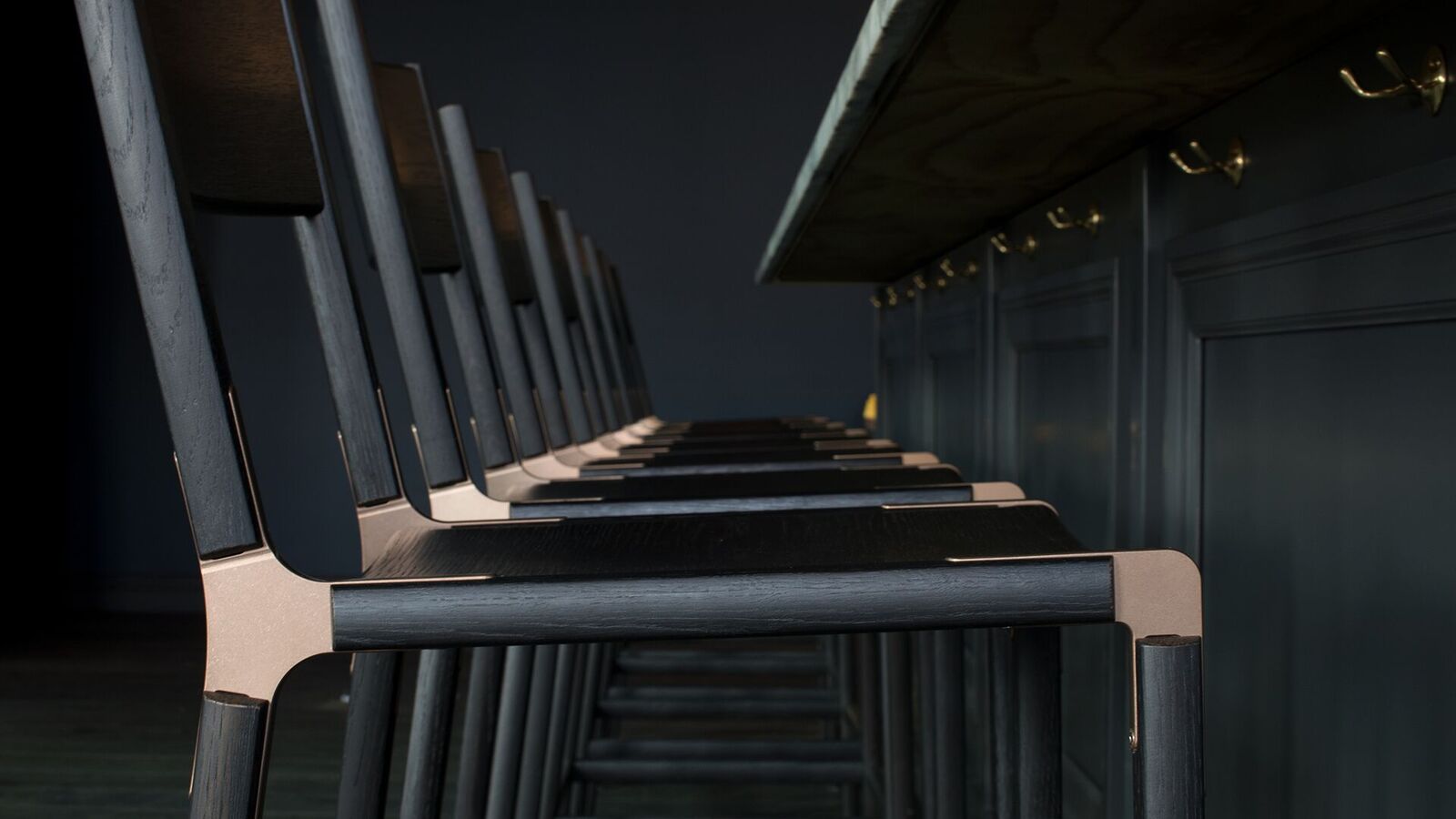 Creators who are starting out and growing a brand shouldn’t let the story of an item end when they sell a work. By revisiting their items in public spaces and staying connected to former customers, they’re able to make sure their work is solid and keep an old piece working for them.

Bring in Your Communities

For any professional Creator, fulfilling orders, managing expectations, maintaining a digital presence, and making deliveries all require structure, timelines, and asking for help. These tasks not only ask Creators to wear different hats, but they also pull them out of the imaginative flux states. David advises:

“You can only do so many things in the day… Recognize that you don’t know everything about all the things you’re trying to accomplish and start thinking about who you might know that does.” 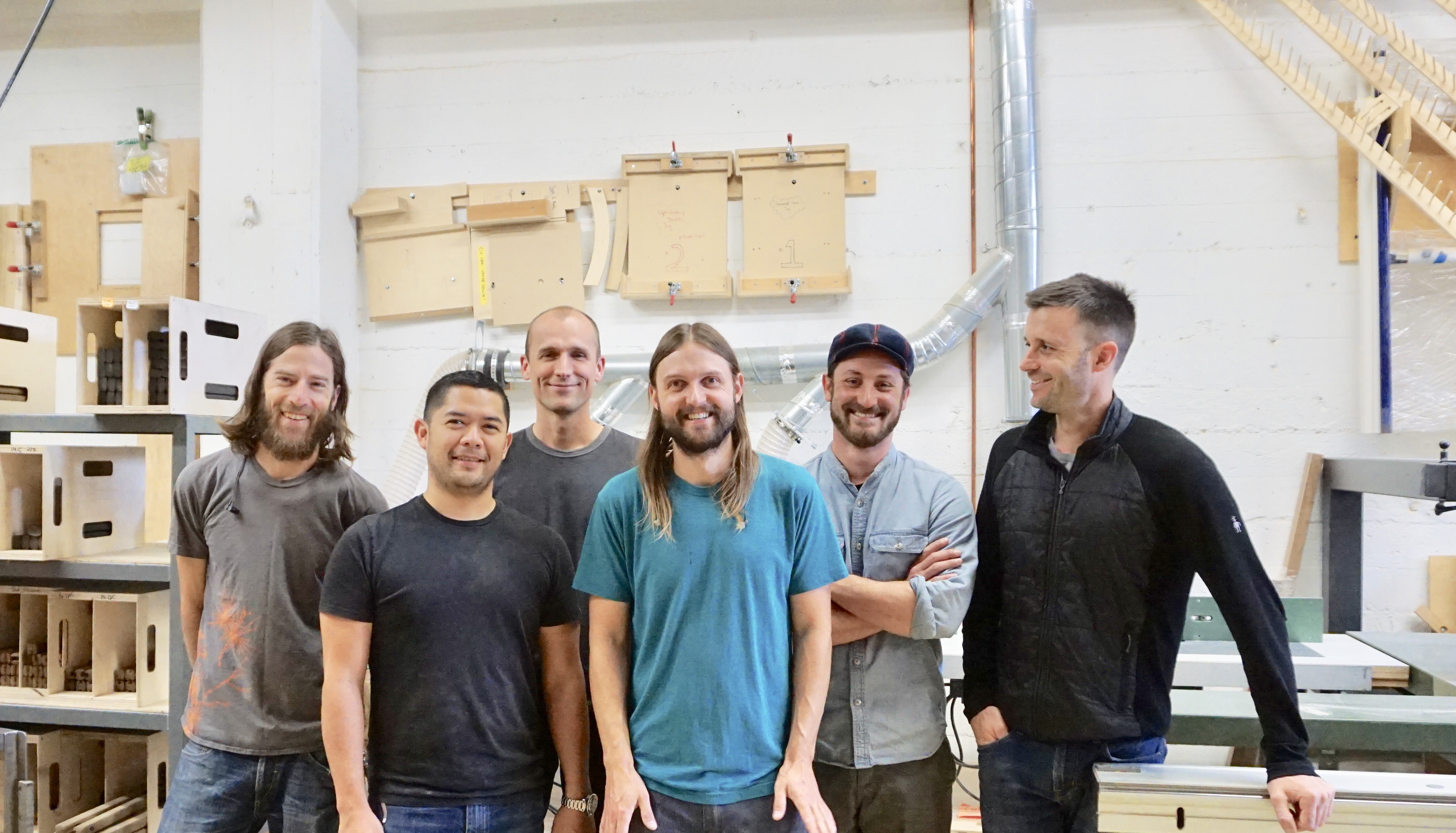 Fyrn partners David and Ros may have complementary skills but they also met serendipitously. Ros’s brother-in-law, Mik Gaspay, leads the creative design at Fyrn and went to graduate school at CCA with David’s wife. David thought the product was fantastic and started dropping by the shop. Ros’s long-term vision for Fyrn resonated with David and soon, they decided they’d do this together. “This was Ros’s baby. I feel very excited to be a part of it now but the product and the concept is totally his” says David. After a kind of co-courtship, they started working together full time to take the brand to the next level.

“We’ve actually never hired someone through a job posting. Every single person who is here emanates from a relationship. And I love that” Dave says.

The team has since grown into a burly group of furniture makers: three guys full time in the shop, one part-time on Creative, and a lot of folks who are there to help out. David and Ros volley stories of off-payroll helpers who have played roles in their success. Ros continues, “If you’re doing something that people are excited about and inspired by, they’re willing to say, ‘Hey, I know someone who might be really interested in helping you.’ All of the folks who are involved here have brought their community forward and that’s a big part of what we’re building.” From a friend sharing press releases to an Architect who helped them put together families of furniture within the Fyrn system, they’re grateful for every step that brought them closer to their vision.

David, for all his business background, has a maker’s mindset. He’s creatively meticulous and—while considering every angle for sales, production, and marketing—he and Ros are also finding ways to make their values work for them and set an example in the industry.

Instead of hiring commercial graphic designers, Fyrn turns to local artists and illustrators such as Chris McNally or Mik Gaspay, who continues to lead creative efforts leveraging a diaspora of grads from the California College of the Arts. Thanks to illustrated packaging and instructions, assembling a Fyrn chair feels more like unwrapping a present (wrapped in repurposed materials) than reading an appliance manual. David describes,

“I don’t think there should be dividing lines there. I think it’s really nice to be able to bring folks in that way… there is also an authenticity piece to that. It’s not always about somebody being wedded by the standard people in the industry, it’s about us wanting to carve out a little bit of a different path.” 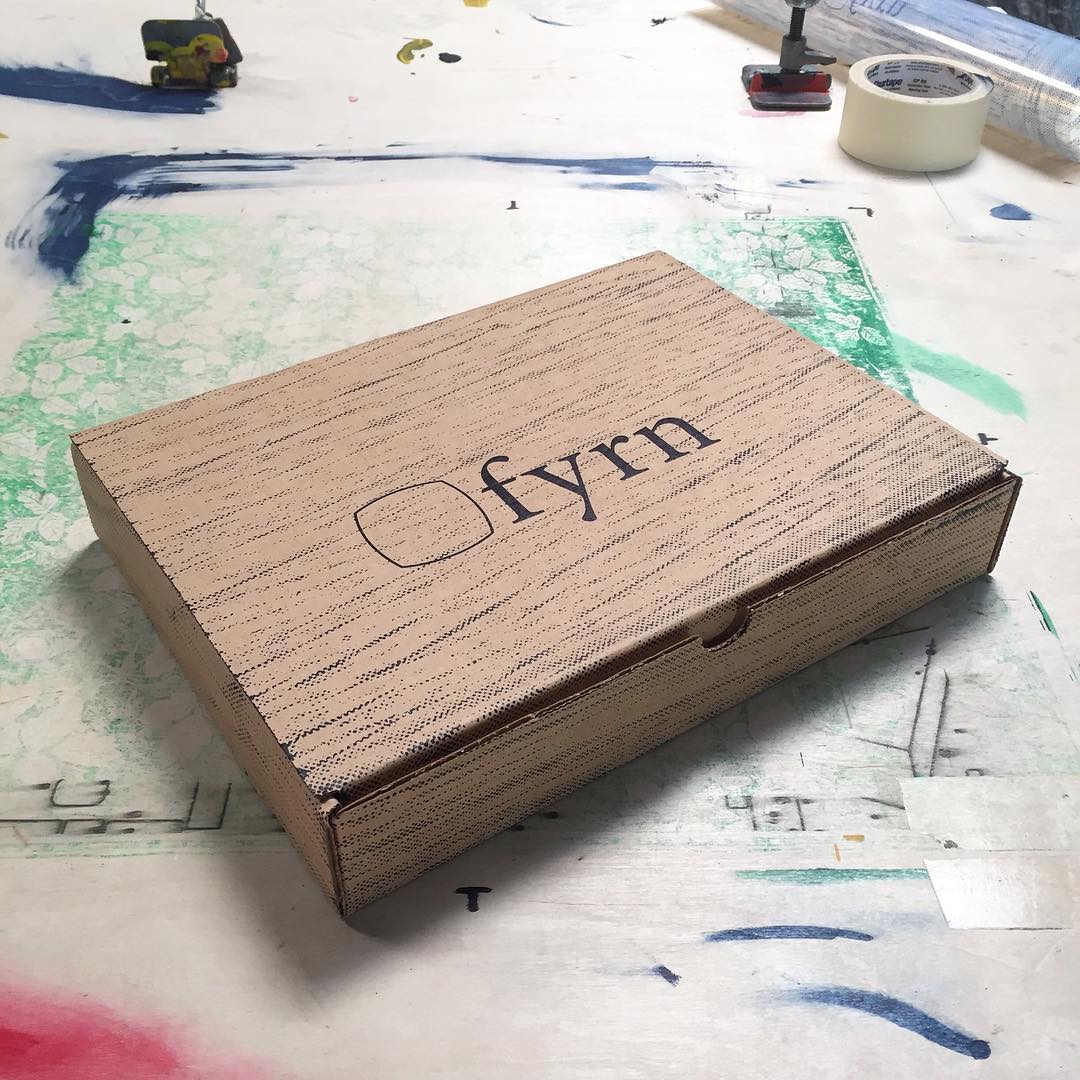 It’s not just about getting “in” with known names or getting your work into the trendiest new bar. It’s a balance of finding who to work with, asking for help, and making the connections known. David says established reputations come with a halo effect, “Knowing that you’re working with people who are respected and sort of admired within any field, I think, brings other folks who might have that same level of credibility to go, ‘Oh, you’re working with so-and-so, I love her, I’ve seen her work it’s fantastic.’ ”

Simplify Your Offering to Meet Demand

Now they’re asking themselves, “How do we make sure that more and more people can get these objects?” It doesn’t hurt to be associated with some of the most recognized brands across the Bay Area—not just creative industries. By connecting with the best venues in San Francisco, Fyrn was able to show to future buyers that their furniture works in trendy and timeless spaces. They’re excited to see more consumers, even younger adults, look for things that are made to last and choose creator-made objects. However, many of their public commissions have custom elements like specialty finishes and fabrics.

“We’re trying to figure out how to make these as accessible as possible. So frequently we get the call, ‘Hey I love it, exactly as I saw it in this place.’ And we’re like ‘Oh that’s actually more expensive or harder to produce today, let me tell you why what we’ve got standard is great.’ And I think that’s just a funny growing pain.” 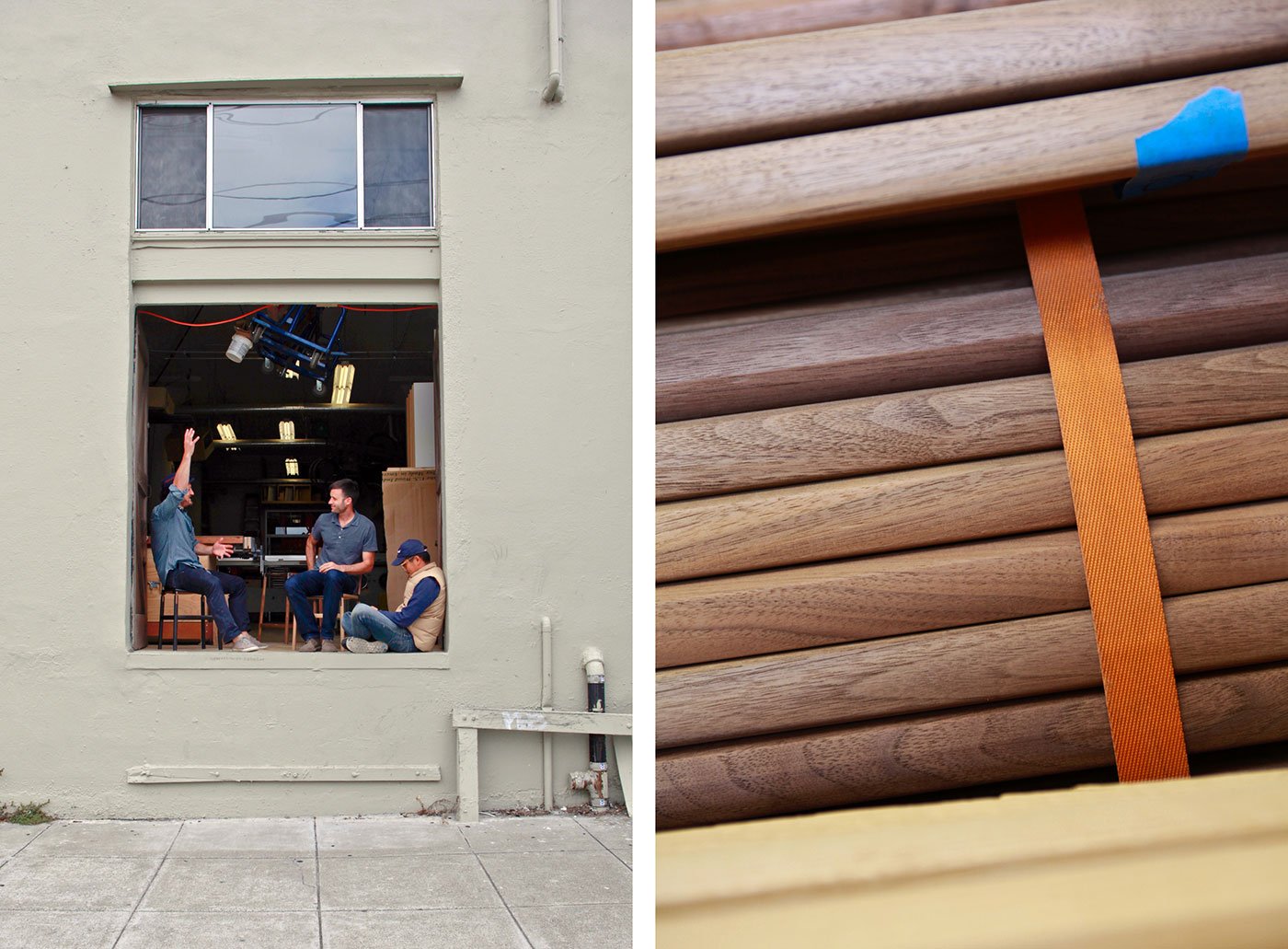 Keep Creating, One Chair at a Time

A Creator makes each object with care. However, when the pressure is on to produce more faster, it’s time to channel that creativity into streamlining what you do best. Fyrn still makes each piece themselves— in the most expensive city in America—but, by streamlining offerings, they’ve managed to keep up and make their works attainable to home buyers. We have been lucky to get to know Fyrn as a team and a brand. No matter how the company grows and how many spaces their designs end up in, we’re happy to know that at least one will end up with Ros’s family alongside the works of generations before him.

Have you sat in a Fyrn chair? See where you can try them out IRL and get inspired for your own space.