You’d easily suspect from the intricacies of their art that The Haas Brothers have plenty of stories to tell and -spoiler alert- it’s true. The Texan duo gives off a more LA vibe perhaps because at heart they are true Angelenos: hard at work making art for people to experience something differently than they can on their own. They provide a reality only they can think up in mixed materials and a never-ending wonderland of works.

We spoke to Simon Haas who from afar seemed as reserved as JD Sallinger. Simon previously had no instagram and was only seen at events or the occasional photo from @thehaasbrothers.  I was nervous to fangirl too hard and spill my excitement because as Artist Curator I have a rep to upkeep . With a severely uncool excitement I dove into the details that make the Haas Brothers’ art what it is.

Simon and his brother Nikolai come from Texas. He describes the influence of growing up gay in a conservative state and how that made him want to put sexuality out there as a normal concept as opposed to something so stigmatized. 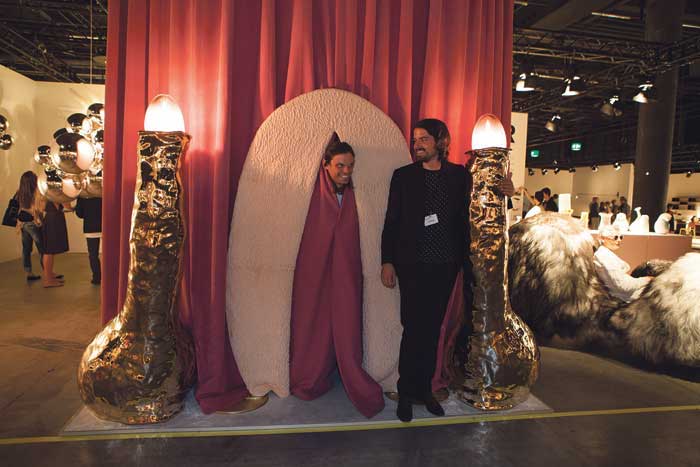 We talked about Exploration

Exploration to Simon is crucial. He has an ongoing piece in the Tom of Finland Foundation– the home of erotic art preservation in LA– titled Glory Hole. For this piece, visitors of the museum can see Simon’s number carved into a wall, the fun part? You can text him a selfie and he’ll come back and carve it into the piece. Because of the nature of the space Simon chuckles and tells us “I mostly get dick pics.” My 12-year-old level of immaturity reemerges and I blush. ‘That’s a lot of dicks.’  Tom of Finland has an epic role in Gay history which to Simon means enabling exploration as liberation and is a deep honor evident in the way he speaks of the works there. The downside to their success according to Simon is the fact that not everyone has easy access to their work. For him, Wescover represents a centralized place for everyone to enjoy The Haas Brothers’ works in the real world.

“Making artwork publicly accessible is really how it ought to be”

On their work at  the Ace Hotel:

In his even younger years, Simon worked at a cafe in Echo Park, LA, where he met Roman Alonzo from Commune Design. Commune are the masterminds behind the ever-trendy Ace Hotel DTLA and quite a few more iconic spaces. Roman knew Simon was an illustrator so years later, once the Haas Brothers were established, Alonzo commissioned them for the Living Icons mural at the Ace. The mural contains familiar faces of Angelenos who contributed something to the city and the culture. It’s all done in graphite and like their work at the Tom of Finland, it’s an active piece. No selfies to send here though, sadly.

When I asked about the meaning and people in the mural Simon told me “it is an ongoing monument on LA history and it’s meant to engage visitors with the true Los Angeles. I wanted to give the Hotel a real feeling of LA.” 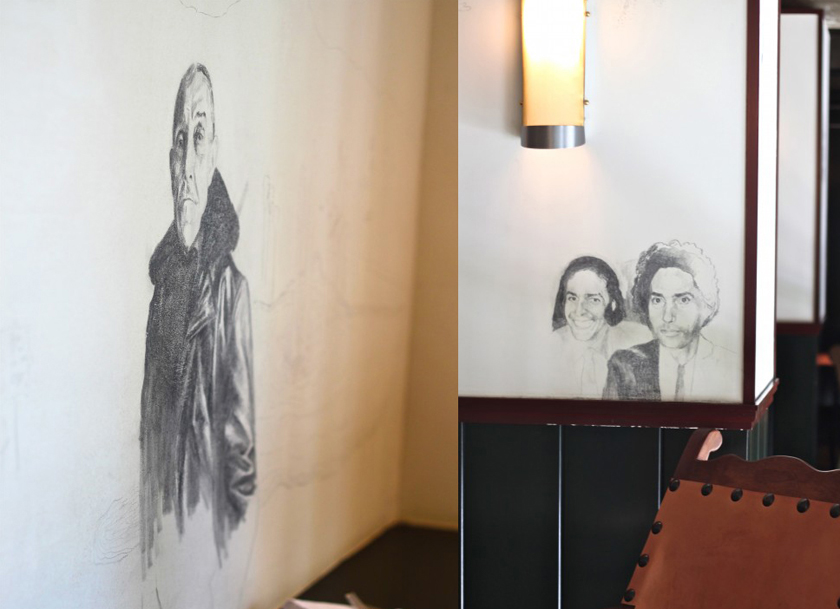 At this point my admiration for Simon grew exponentially as I had predicted but what he would share then on was so touching I could only wish I’d have the adequate words to share with our readers. I asked sheepishly How do you come up with the things you create? Simon responded: “I can’t handle my feelings so I put them in my art.” The devotion to his work is evident but once he told me that I knew this was someone who was immensely invested in sharing his story with the world. The reason the fraternal twins put sex into their work is to break the taboo. Sex is a part of nature and they pay homage to natural processes; How plants grow, how coral grows, the patterns organically created by nature. He mentioned their ceramics are works of accession– brushing layers of clay onto a clay body “almost obsessively” as Simon puts it. “I try to do things so they reveal naturally. I have a knack to do things repetitively, and to take the time to make my pieces.” 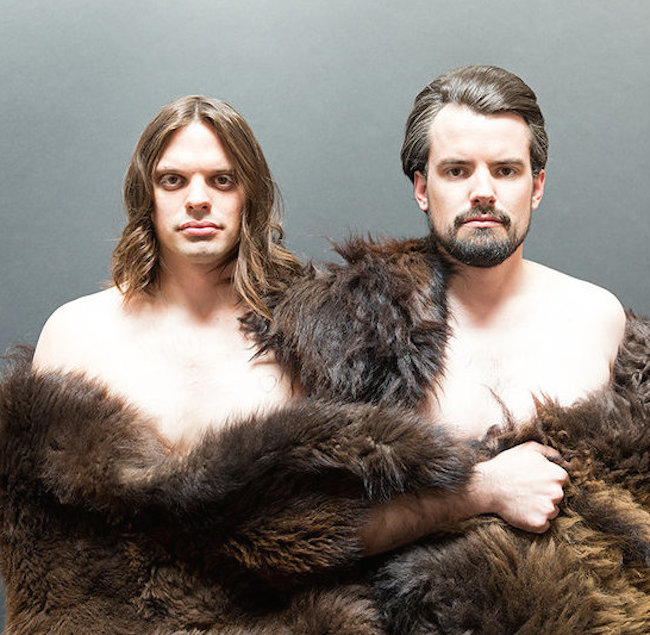 Simon created a programmatic analog computer to work with paper and crystal beads– By implementing an algorithm that allows beads to organize themselves they shape into plants, leaves and other naturally occurring shapes. He writes the programmatic functions, then the functions make the beads arrange themselves– he came up with this process in Cape Town while beading with the locals. Also in Cape Town they met whom are now known as The Haas Sisters, a group of women whose artisanal artifacts resembled their work but whose world couldn’t be more different than glamorous LA.

On the feelings they feel their work should evoke

What do you want people to feel when seeing or using your piece for the first time?

“We want people to feel a relationship with the object or to be bewildered by it. To get something rolling around in a person’s head is really our goal. Our personal lives really filter through our work: The materials are a representation of my obsessive personality. I used to talk a lot about drugs and psychedelia, though now I am sober so my work will reflect that.”

At first I was tense and at times afraid of asking questions to someone who seemed to embody all the things I strived to be. I was afraid to ask stupid questions, to giggle at the amount of contrived sexual organs, to have a freudian slip, but I learned through their art that this is the exact opposite of how I should feel. After speaking with Simon Haas I came out blissful and enchanted by what we all can make of our inhibitions. The Haas Brother’s work made me feel empowered and truly fucking normal. It gave me a place in the world as a weird creative who has her own obsessions and who can dismiss her fears though art. When I see their work now I simply think to my inhibitors: kindly fuck off. And that’s what art is supposed to be; Art is supposed to make you feel something.